This is the tale of two companies. It was the best of times for one and the worst of times for the other, even though you wouldn't notice much of a difference by visiting their brick-and-mortar storefronts.

Picture two establishments, a mere mile away from each other in a bustling seaside town, not unlike our illustrious city of Savannah, GA. They both are purveyors of boutique fashions for women, and both have enjoyed moderate success until the present time. If the laws of physics were to allow it and we jumped a couple of years into the future, we would notice that one store thrives while the other emits the unmistakable odor of chaos and decline. Why the vastly different fates? The Clothing Corral, aside from the implication that their customers might resemble farm animals, discovered that online marketing, especially the territory of social media, was the gateway to their future success. Refusing to be fenced in by convention, they broke from the herd and to rode hard after untold profits. No longer saddled with old traditional marketing limitations, they found greener pastures on the world wide web.

Tops N Bottoms has trust issues. For many years, their sustaining marketing methodology included a Yellow Pages ad, a sponsored billboard on the outfield fence at the Little League park, and sidewalk sales in May and August. Supposedly foot traffic was always their best source of sales, but the manager was never quite sure about that. The owners are in many ways fully competent to engage in commerce, if time stood still in 1989. The fax machine is as far as they go when it comes to newfangled technological marvels.

So what's the secret to the Corral's success? Expanding to two stores when they buy out Tops N Bottoms in a few years is only the beginning. Let's look at just one particle of what makes them Blue Ribbon Winners.

Social Marketing, or more specifically, using Social Media at every stage of the buying journey to invite people to experience the Clothes Corral difference. According to the Pew Internet Project, 46% of us include some form of social media when making a purchase decision. This social marketing Savannah GA industry is a constantly-evolving trade, with ties to current social media rather than old-fashioned traditional marketing.

It started when Tricia started working at the Corral in the summer. She was a marketing major at the local college and wanted to try out some ideas for the store. "No problem," said the owners, "Might as well get some ROI on that fancy education we're paying for." So with her dad's permission, she started with something she knew well: Social Media, now transformed into the business of Social Marketing Savannah GA.

She started by finding and listening to conversations by others who either had commercial interest in women's fashion or just enjoyed the topic. She followed a lot of retailers on Twitter, Facebook and LinkedIn. Then she moved on to Pinterest to learn even more.

She found employees of different boutiques and suppliers in the area and "friended" them. She got some helpful insights and advice. Networking on Social Media was actually fun, and something Tricia did anyway.

Soon, as she started creating posts on different sites, strangers began to convert to customers. Now it was time to put some vitamins in the feed!

Content creation was the boost Tricia needed. As she got more interested (and had an assigned project that was due next semester), she began thinking about the brand. What persona? What vibe? What language was the lingua franca of the Corral's customer base? Blogging, with posts blasted out to her growing network began to provide a real identity for the store outside the usual summer beachgoers. 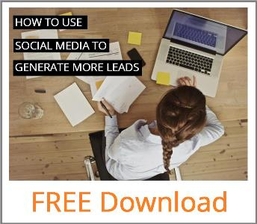 Photos were a big part of Tricia's social media posting activity. New items, accessories, the cat that roamed the shop floor, happy customers, even the itinerant window cleaner all became part of the Clothing Corral's public persona. And orders began to roll in. The impetus behind a slowly increasing volume of sales was the simple fact that customers tend to trust word of mouth rather than a direct assault by marketing and sales. There was now an actual conversation in place with The Clothing Corral as the central topic.

It didn't take long before Tricia needed help. Monitoring all the activity, questions, comments, customer service issues and more now kept Tricia from working the cash register. They hired a kid from town to run the online store and help keep the social marketing effort going. "It beats mowing lawns all summer," was all he said.

By now, profits were up and The Clothing Corral did more hiring. When they heard that Tops N Bottoms was struggling, Tricia's dad had a decision to make. Grow or shrink? He, like any good Captain of Commerce, decided on growth. Now, with two locations and a thriving online store, the Corral was as sound and sturdy as a young Texas Longhorn.

United WebWorks loves the Social Marketing Savannah GA scene. We can help you get your cattle to market too! Check out our Services page to find out more!

Juniors Online Boutique
Teaching your potential customers and clients, including Google and social media revenue growth content, will established trust your organization and increase your audience.